In view of the Lok Sabha elections news channels are in top gear discussing political topics. Before the results of the four state legislative assembly elections Narendra Modi, his personality and record were discussed threadbare. But after the announcement of results the scenario of political discourse/debate on news channels changed drastically. Aam Aadmi Party (AAP) came out triumphant winning twenty eight seats out of seventy in Delhi and changed the political landscape forever.This success of the AAP forced news channels to discuss the new phenomena. Newspapers started giving wide coverage to AAP and its leader Arvind Kejriwal. On second of this month Kejriwal proved his majority on the floor of the Delhi assembly with the help of eight Congress legislators. With less than four months to go for the general elections, the political game is at its peak.
On social media, right wing activists and BJP supporters started the smear campaign about the tacit understanding between AAP and Congress. In one of the discussions on a news channel BJP and AAP representatives were at loggerheads. Viewers were faced with the spectacle of six windows on the screen of the channel showing the representatives of AAP, BJP, Cong and two journalists along with the anchor of the show. In that six window AAP and BJP representative started fighting and firing salvos at each other. But this is not the story. The real story is the body language of the Congress leader.
While BJP and AAP representatives were fighting, the Congressman was smiling and kept mum. This screen shot of the news channels gave us some sign of the politics of the grand old party during the coming Lok Sabha election. It seems that Congress does not want a direct fight between its heir apparent Rahul Gandhi and BJP prime ministerial candidate Narendra Modi in the upcoming Lok Sabha elections. Rather, Congress will try its level best to make it Modi versus Kejriwal. Party insiders say that they are working overtime to make this happen. If this happens, the Yuvraj of the Congress will be saved of the embarrassment of losing the first electoral battle fought under his leadership.
Last December, when Congress announced the unconditional support to AAP after its massive defeat in Delhi, political pundits announced that this step will be disastrous for the party. Similarly, when Rahul Gandhi said that the party has to learn from the AAP after the defeat, political analysts termed that statement kiddish. Both the assessments of are somehow proving wrong.
In today’s scenario those two smart moves were made to defeat Modi or at least check his growing popularity. The result of assembly elections proved that there is a wave in favour of Modi and congress assessed that it is not in a position to stop the Modi wave. The new leadership of the Congress is seen as weak vis a vis Modi.
The credibility of Congress and the UPA government is at an all time low. Corruption and inflation played havoc for the Aam Aadmi. The people of this country started seeing a saviour in Modi and an able administrator and Vikas Purush. Modi’s publicity machinery, very smartly, created an atmosphere that Modi is the only saviour.
In this highly charged political situation Arvind Kejriwal’s success came as a ray of hope for the congress party. They grabbed this opportunity and announced unsolicited support to the AAP. Now, the question is whether this move will work in favour of the Congress in the coming months.
The fact of the matter is that Congress has used this trick in the past. The party used Charan Singh against Morarji Desai, Chandra Shekhar against VP Singh. Many a time Congress used this move of chess in Indian politics. The party used the pawn to check mate the Wajir or the King and came out successful. In the past congress successfully check-mated political opponents and stalwarts by its sheer political brilliance. By installing pawns at top positions.
By doing this Congress minimizes the anger of the masses towards the party. After some time it pulled the rug and created an atmosphere which led people to believe only the Congress can give a stable government. History repeats itself is an old saying and again Congress is trying to repeat history. But this time the game is slightly different. It seems the pawn is cleverer than ones in the past. AAP is not in the game of conventional politics and if it gives the impression that it can give an alternative then the political scenario of this country may have changed forever.
But it is for sure that Congress is going all out to curb Narendra Modi’s popularity. The old Hindi song – Ham toh doobe hain sanam tumko bhi le doobenge.
Posted by अनंत विजय at 12:50 AM No comments: 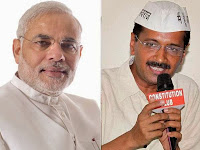