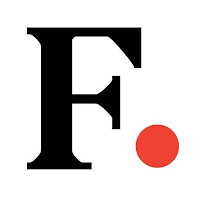 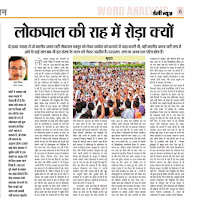 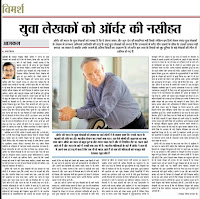 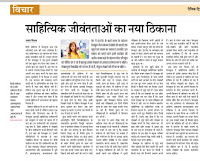 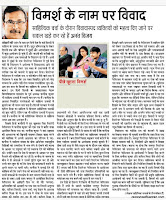 Posted by अनंत विजय at 10:15 PM No comments: Links to this post 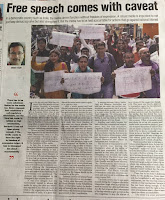 In the last one year, Bihar witnessed four fatal attacks on journalists. Recently, a journalist working with a leading Hindi Daily was shot dead in broad daylight in Sasaram. Before that, it was alleged that an associate of Mafia don and RJD leader Mohammad Shahabuddin killed another journalist in Siwan. Likewise, a journalist was also killed in Jharkhand. So, journalists are being killed at regular intervals but the champions of Freedom of Expression are maintaining complete silence.
Till now, no Press Club meeting has been organised for the murdered journalist Dharmendra. There is no long speech in favour of Freedom of Expression, nor is there any write-up about the murder of fellow journalist of Sasaram.
In fact, this is more serious a threat to Freedom of Expression than the government banning any organisation just for few hours. A few days back when Ministry of Information & Broadcasting slapped 24 hours ban on a private news channel for allegedly violating the cable and television regulation act, many editorials were written and statements were issued criticizing this move of the government. Protests were held, and the move and motive of the Narendra Modi government were questioned. This move was compared to emergency or even fascism.
It was also alleged that government wanted to silence the Media by using Cable and Television Regulation Act. Nobody wants listen to the arguments put by Government of India. It is good that almost entire Media comes together to oppose the ban.
After a week’s protest and back channel compromise, government put the ban on hold. But that incident again underlined the need for serious discussion on the rights to Freedom of Expression.
People of this country are very touchy about this right to Freedom of Expression. When Constitution came into force, the Freedom of Expression was almost absolute. But that time Pt. Jawaharlal Nehru was worried about the speeches of Shyama Prasad Mookherjee, who was spearheading the movement of Akhand Bharat just after the partition. His speeches were fiery and attracted most of the press coverage at that time.

In fact after partition, large-scale attacks happened on Hindus in East Pakistan and large number of Hindus migrated from East Pakistan. After that large scale violence, Nehru and Liaquat Ali Khan decided to sign an agreement to stop violence which was later known as Nehru-Liaquat Pact. According to that proposed pact, nobody in either country will engage any activity which may precipitate war, and even speeches are to be curbed. But the Freedom of Expression guaranteed under Indian Constitution was the biggest hurdle in finalisation of the pact. Pakistan considered Shyama Prasad Mookherjee’s speech as war mongering. Nehru even discussed this with his Home Minister Sardar Patel. At that time, under the leadership of Nehru it was decided to define and restrict the Freedom of Expression guaranteed in the Indian Constitution.
A meeting between Pt Nehru, Sardar Patel and Dr Bhimrao Ambedkar was held and the result was the first constitutional amendment. But it was not on the basis of this pact but on the basis of court verdict in a case of Crossroad magazine. This magazine was vehemently opposing the policies of Nehru. A case was filed and the verdict came in favour of Crossword.

Another case which became the basis of first constitutional amendment was RSS magazine Organiser. These are the facts in the historical documents. This was the first move to curb the Freedom of Expression which was vehemently opposed by Shyama Prasad Mookherjee in Parliament and otherwise too.
The second serious move was during emergency, when all the rights of Media were suspended. It was also opposed at that time, and after the emergency was revoked it was also lifted. This was the second major move to curb the Independence of Media. The third move was also during the Congress rule when Rajiv Gandhi was the Prime Minister. Government introduced Defamation Bill in 1988. It was aimed to limit the right of Freedom of Expression. The Rajiv Gandhi government could not succeed and was forced to withdraw the controversial bill. The forth serious move was also mooted during the Congress rule under Dr Manmohan Singh, when a proposal was made to amend the Cable and Television Act. By that proposal, government of the day wanted to give powers to area SDM to stop the telecast of news channel if he thinks it is a case to do so. This move was fiercely opposed by journalist fraternity and again government was forced to withdraw it. That time Broadcast Editors’ Association was very active.
If we analyse, we can see a pattern in these moves to curb the freedom of the Media. But the threat to Media has now changed. The job security of the journalists and threat to the life of reporters are to be taken into account. When a journalist is not sure about his or her job security and works under tremendous pressure how can we expect him/ her to be fair. How can we expect a reporter to work fearlessly if he or she is constantly under threat to his or her life? These are the major hindrances in the way of free press. Editors Guild and other journalist organisations have to think about this.
There is another side of this story where news channels are showing fictions for hours. Dreaded terrorist Baghdadi’s killing story and Islamic State visuals are the classic case of such fiction writing. It’s a matter of serious research that how many times news channels killed Baghdadi. News channels never think before airing the audio or video clips and about veracity or authentication of such clips. Just put a disclaimer that this channel doesn’t verify this visual/audio and run it for hours. There has to be some Lakshman Rekha for Media too. News channels had established a self-regulatory mechanism, but the time has come for them to rethink on that mechanism, because this mechanism is not seen to be strong enough. If the Media wants to have the right to Freedom of Expression intact it has to introspect too.

Posted by अनंत विजय at 8:15 PM No comments: Links to this post 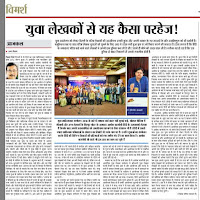 Posted by अनंत विजय at 8:46 AM No comments: Links to this post 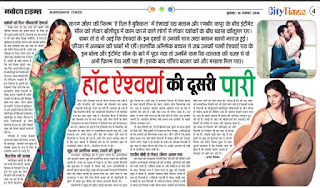 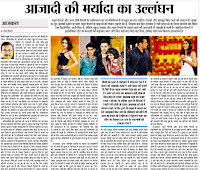